The communal house is the most important building in a Bahnar village. Traditionally, communal houses serve as meeting halls for the men in the village and as places where rituals, celebrations, and preparation for war or defense of the village take place. This house was built after the model of the 20th century communal house of Kon Rbang village (Vinh Quang commune, Kontum Town, Kontum Province). This model house in Kon Rbang is the only one that maintains the traditional system of building with poles and beams, which has existed for over 70 years in the Central Highlands. In order to create a traditional communal house untouched by modernization, museum researchers worked closely with villagers and consulted old photographs to better understand the traditional model. The form, size, and structure of the museum's communal house replicate those found in the village now, though the house you see here has restored many of the traditional features that have been lost in today's village houses. The roof here is made of straw rather than corrugated iron. The rafters are made of circle-shaped pieces of wood rather than square ones. The floor is made of bamboo rather than wooden planks. The stairs are rounded pieces of wood rather than cement. The wood, bamboo, rattan, and straw used for making the house were brought from the Central Highlands. The diameter of the largest poles is 60cm. The length of the beams is 14-15 m. The height of the roof is nearly 19m including the decorative frame, with each of the principal roof beams about 13m long. The 90m2 floor is elevated 3m above the ground and accessed by four sets of stairs. The Vietnam Museum of Ethnology invited 29 Bahnar people from Kon Rbang to construct the house on the museum grounds. The first poles were erected on April 26, 2003. On June 4, 2003, the house was fully completed. Visitors to the VME now have the rare opportunity of experiencing this unique architectural style first-hand and appreciating the tradition 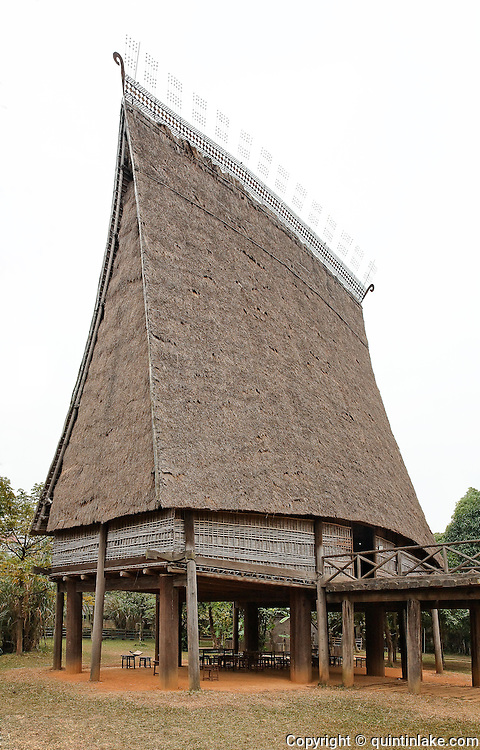